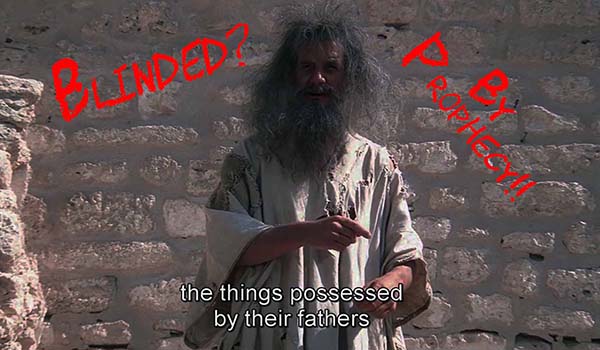 Daniel was blinded by prophecy.

Christians enthusiastically claim that the Book of Daniel proves that the Hebrew Bible predicted the life and crucifixion of their Jesus Christ.

On the other hand, some Jews believe that the Book of Daniel predicted the destruction of the Second Temple by the Romans in 70 CE.

Both of them, Jews and Christians, insist that the book of Daniel validates their view of God and, indeed, their view of life and falsifies the position of their opponents.

In this blog, I will show that they are both missing the point. It must be obvious to any sane person that the concepts of prophecy, divine punishment and guilt by association are morally toxic and spiritually dyslexic.

In this document, I will show that both Christians and Rabbinical Jews, in their determination to find personal and cultural validation in the Hebrew texts, totally miss a much older and deeper insight into the nature of God. It is to these older texts, and the teachings they contain, that the Jesus of History was referring in the Q-Source.

Analysis of the Book of Daniel:

On investigating the language of the Book of Daniel, independent scholars have concluded that the Aramaic and the Hebrew of the Masoretic text strongly suggests that the bulk of the text was written in the second century BCE (over four hundred years later). The latter part of the text cryptically discusses the Greek invasion of Judah, which culminated in the rule of Antiochus IV Epiphanes in the second quarter of the second century BCE prior to its fall to the Maccabean revolt and the re-establishment of Hebrew hegemony within Judah. HERE

Christians shamelessly forged the text of chapter nine to insert their sacrificed Messiah and rendered the text of their Bible unintelligible in the process. But that fraud is easily overcome by referring to the original Hebrew and can therefore be discarded here, as it is of little interest to this discussion. HERE

What is of interest is the idea of prophecy and what it says about our relationship with God.

Human Suffering: “It’s all your fault!”

For most of the history of human beings, we have been trying to make sense of human suffering. Looking back at that philosophical evolution, it seems that the consensus of opinion has oscillated between two camps.

On the one hand, people assume that human suffering, from natural disasters to hitting your thumb with a hammer, is evidence that we have somehow offended God. The Book of Daniel is predicated on the idea that the destruction of the Temple of Solomon, and of Jerusalem, is ‘Ipso facto’ evidence that the Judean people had offended God. The priests and scribes were never asked for evidence of the collective crime of the people nor was any provided.

On the other hand, some people have a deeper relationship with God, and realise, through introspection and analysis, that life is like an interdependent net of causation and effect that stretches infinitely through past, present and future. The drama of life moves like a sea in time and space and events are like ocean currents that catch us up and push us forward.

The book of Koheleth (The Preacher) which Christians call ‘Ecclesiastes’ expresses such a view:

“I returned, and saw under the sun, that the race is not to the swift, nor the battle to the strong, neither yet bread to the wise, nor yet riches to men of understanding, nor yet favour to men of skill; but time and chance happeneth to them all.”

Koheleth and the Jesus of History recognised that often we are caught up in the dramas of life and suffering cannot be avoided and nor should it be. In fact, it is an invaluable part of life.

“God makes his sun rise on the evil and the good. He sends rain on the just and the unjust.”

Context of the Book of Daniel:

The world of the Levant in the second century was full of Oracles and Prophets who spent most of their time stoned out of their minds (quite literally). Inevitably then, their pronouncements skidded between ‘cryptic’ to total gobbledygook. It is obvious that these apocalyptic pronouncements formed a particular genre of ancient literature.

It was inevitable then that the Judean prophetic tradition would follow this Greek literary form.

Unfortunately, history has proved that the big problem with apocalyptic pronouncements in particular and prophecy in general is that they are all totally useless. From Saint Paul’s prediction of the rapture in his lifetime to the never ending predictions of the End of the World, not one word of prophecy has stopped human suffering.

It was for this reason that the Jesus of History said:

“Have you understood the beginning, that you ask about the end?”

The early Hebrew view of God understood the following:

The Jesus of History maintained that the Judeans had forged the scriptures and their visions of God were not his. The God of the Jesus of History is the God that gave Daniel the courage to enter the lion’s den and remain calm. The same courage and faith that prompted Jonah to go for a swim.

It is possible to argue for eternity about the prophecies in the Book of Daniel, if you are a Christian or an Orthodox Jew, I wish you joy of it but please don’t waste my time, as it only proves you have no connection to the eternal source of life and love. It is my prayer that you might be quiet enough, for long enough, to hear his voice for yourself.