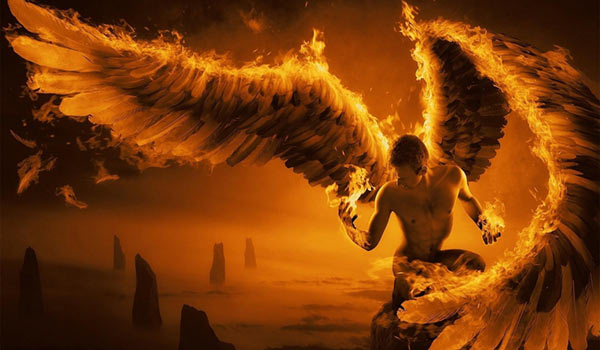 Christianity would be nothing without the idea of Satan or Lucifer as a rival to God. I’m sure you will have noticed by now the amazing similarity between the dualistic philosophy of the Gnostics and Christian dogma.

The theology of Saulus of Tarsus (Saint Paul) flirted with the idea of Satan as a rival to God. However, it wasn’t until Saint Augustine that Satan and Hell became the fulcrum upon which the entire Christian Church turns.

“The good Christian should beware of mathematicians. The danger already exists that mathematicians have made a covenant with the devil to darken the spirit and confine man in the bonds of Hell.”

Augustine was an ex-Gnostic and came from Algeria. In order to explain and justify his continued sexual addiction he invented the concepts of Satan and Hell. Interestingly, as we’ve seen above, he also hated science and learning. You will be relieved to know that there is no evidence of Lucifer in the Hebrew text of the Old Testament or in Jewish belief. Like the doctrines of Original Sin and Total Depravity, Satan has no basis in the Old Testament.

In the Christian version of Job 1:7

“And the LORD said unto ‘Satan’, Whence comest thou? Then the ‘Satan’ answered…”

The implication is that Satan is the rival to, and independent of, God, which in Hebrew thought is impossible. Actually Genesis is a typical Hebrew satire meant to illustrate human nature. The actual word is ‘H, S, tA, N.’ and means the ‘Adversary’.

“And the LORD said unto ‘The Adversary (angel)’, Whence comest thou? Then the ‘Adversary’ answered…”

In Jewish belief, the term Shitan (Adversary) is a description of a role any angel may fulfil. Much as any lawyer may become a ‘Prosecutor’ any angel may be created by God as an ‘adversary’. All actions in life have an effect. If I’ve cheated or murdered someone then there is an effect to myself and to the world ‘out there’, which will have to be dealt with. This concept of a weight of judgement ‘out there’ waiting to readdress the balance of the universe is what Shitan refers to.

From a Jewish understanding of Genesis, when God created man with freewill it meant that the entire universe had to be designed in order to accommodate the possibility that humans might choose wrongly. Just as cars are made with wheels that turn both to the left and the right, humans have the choice to choose the illusion of self or they can choose the will of Heaven. Suffering and evil are merely the highway code of the universe. Governments do not create traffic penalties in order to torture people, they are there to encourage order and the safety of all. So too, in Jewish thinking, is the adversary a servant of God.

It is a truism that lies can only flourish in a soil copiously nourished with the manure of ignorance.

The Gnostic doctrine of Satan has been protected by the Church in two ways:

Lucifer is a good example of this studied ignorance. Most Christians use the book of Isaiah to justify both Christ as the Messiah and Lucifer as the rival to God. Both of these ideas are mistaken.

“Thy pomp is brought down to the grave, the worm is spread under thee, and the worms cover thee. How art thou fallen from heaven, O Lucifer, son of the morning! [how] art thou cut down to the ground, which didst weaken the nations!”

Note: Angels – even fallen ones – do not rot in the grave! Nor are they worm food.

The words in Hebrew: “Heleyl, ben Shachar” — Heleyl, son of Shachar means: ‘Day-star, son of the morning!’ The poetic reference is to the planet Venus, which always heralds the dawn (Son of Morning) and is refereed to in Latin as ‘lucem ferre’.

This text is specifically discussing the Neo-Assyrian King Shalmaneser V, son of Tigiath-Pileser III, and his death shortly after defeating the Israeli capital city, Samaria.

The correct translation would be: “Day-star, son of the morning!” By leaving the word ‘Lucifer’ in the text the biblical translators were purposely adding something to the text that the prophet did not originally intend. ‘Lucifer’ becomes a name for a demigod instead of a poetic alliteration between the planet Venus and the death of a king. The Church has painted the Cosmic Christ as the antidote to the ‘Devil’ they created.

The problem with this outward approach is that it ill equips the student to find their way to introspection.

Christian apologists often dismiss the earliest ‘Logia’ of the Jesus of History as Gnostic but we have seen that ‘Gnosticism’ is defined by its dualism not by the direction of the soul. We can see now that such a condescending dismissal reveals more about the ignorance of the accuser than it says anything about Nazarene Judaism.