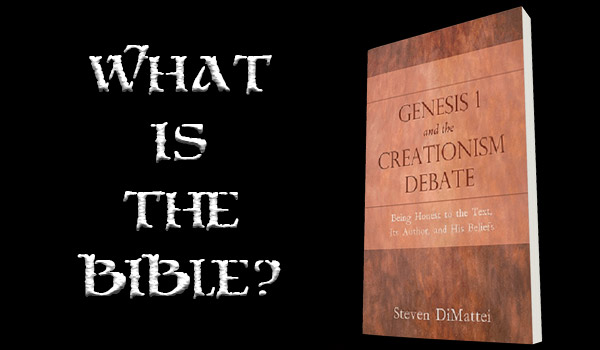 by Antonio Sebastian
The Bible

What do we mean when we ask ‘What is the Bible?’ For instance, is what I as a biblical scholar mean by this question the same as someone whose relationship to the text is defined by their faith? Should it be different? How exactly does one, or should one, go about answering our question in the first place? Might one’s faith or inherent presuppositions about the text prematurely prescribe what the response ought to be, prior to actually investigating the biblical text on its own terms? In other words, have we as individuals, faith communities, a culture, already imposed a predefined answer to the question ‘what is the Bible?’ that is rather based on what the Bible means to us as individuals and faith communities?

Aren’t the questions ‘what is the Bible?’ and ‘what does the Bible mean?’ two different questions? Wouldn’t the latter question elicit a subjective response, that is one that is defined by its subject, in this case the reader or hearer of the text?

As we can see, the question ‘what is the Bible?’ is more complex than would initially appear. The questions above were meant to get us thinking about not only the complexities behind our query, but more so the assumptions and predispositions that we might unconsciously harbor that would influence our responses. In other words, we must distinguish objective responses (what the Bible tells us about itself and its compositional nature) from subjective responses (what the Bible means or is with respect to its readership). Our aim should be to provide an objective response to our query: what do the biblical texts themselves reveal about what the Bible is? Yet before we embark on this discovery, there are other preliminaries to ponder. Independently written texts and traditions, to answer this section’s question directly. We will return to this topic later, but presently we need to get our heads around the word “Bible” and all that it implies and invokes. For instance, the question ‘what is the Bible?’ already presupposes the existence of the Bible. But the Bible itself is composed of texts that were all created and written before there ever was a Bible. So what is our question really asking? What are the textual components of what later generations came to label “the Bible”? Or are we talking about what the word “Bible” means or signifies, or what the label “Bible” implies or imposes as an interpretive framework upon these earlier once separate texts?

In other words, how exactly does this later label, “the Bible,” which means “Book,” affect our reading and understanding of these earlier, once separate, texts? Is what is implied and invoked through the term “Bible”—”Book”—something different than what were the once independent scrolls and codices that are now book-ended together under this label? Does the word or concept associated with “Bible” impose a different interpretive understanding of what the Bible is than an examination of the individual biblical texts before there was a Bible? Is, therefore, the question ‘what is the Bible?’ asking us what this collection of texts as a “book” means and implies? Or, is the question asking us about the texts that were before the Bible was, their authors, their audiences, and the historical circumstances that prompted these texts to be written in the first place?

Apparently then, the question ‘what is the Bible?’ already prejudices and presupposes a biased answer through that which is already taken as an unquestioned given in the question itself: namely that our question is posed to, and of, a Book! Since Bible means “Book” our question already presupposes we are dealing with a Book, and therefore dealing with what this label means and implies when applied to an earlier assortment of independent texts. But isn’t this a different query than enquiring about the nature of the biblical texts themselves before there was a Bible? One query implies its object of study is a “book”—itself a subjective label, a label applied as a result of a particular readership’s understanding and perception of these texts—while the other implies its objects of study are the once separate texts and traditions which were independently written over a period of roughly 1,000 years, by varying authors, and under diverse historical circumstances and religious and political convictions, before they were co-opted by a later generation of readers as part of this so-called “Book.”

We know that the Bible as we have it was not formed until the  3rd century AD, and largely under a Christian interpretive agenda. Would our answer to the question ‘what is the Bible?’ be the same or similar to that of a culture or community which existed before there was a Bible? In other words, is what the Bible is the same as what the Bible’s many scrolls (or biblia, “books”) were or meant to pre-biblical communities? What if we were hypothetically to ask a community of Hellenistic Jews living circa the dawn of the common era what were the scrolls that they were reading—commonly know as ‘the (scroll of the) law and the (scrolls of the) prophets’—do you think their response would be similar to our response to the question ‘what is the Bible’? Should it be? What about the ascetic Jews living at Qumran who were frantically copying and safeguarding numerous scrolls (deemed both canonical and non-canonical by later communities), would they respond similarly? Or what about the Judean Jews (the educated scribes and Levites) living in the 5th-4th centuries BC who actually collected, codified, and authenticated as scripture the texts and traditions that now make up ‘the scroll(s) of the law of Moses,’ the Torah—would they respond similarly? The question ‘what is the scroll of the law of Moses?’ cannot possibly invoke the same response, nor mean the same thing, as ‘what is the Bible?’ with its additional 61 books, different agendas, different audiences, and different expressed political and religious concerns and beliefs. Could it? Should it? What if we moved even further back in time, to the actual authors of the texts and traditions that later became collected together and labeled as “the Bible”?

To the Levite priest writing a scroll in the 7th century BC that will become the core of the book of Deuteronomy: What was the text that he was writing and to whom? This is certainly not the Bible! nor even envisioned as part of what almost 10 centuries later will be labeled “the Bible” by vastly different people, for vastly different audiences, and to address vastly different concerns and beliefs. What about this Levite priest’s rival, the Aaronide priest writing a century or two later (6th-5th c. BC), who most probably was writing a scroll—now the book of Leviticus and a large portion of Numbers—to replace the scroll of his Levite predecessor and to denounce the claims written therein: would these two priestly schools have responded similarly to what they thought was the scroll they were writing? Is this the same as ‘what is the Bible?’ Or, what of the chronicler (the author of the books of Chronicles), who, living in the 4th century BC, rewrote the ‘history’ of Israel as preserved in the earlier books of Samuel and Kings in order to have ‘history’ now represent and address the chronicler’s own religious concerns, beliefs, and worldview—what did he think were the scrolls that he was writing? And what were the scrolls that he saw himself replacing? Are these all to be answered with the same response as ‘what is the Bible’?

We could go on like this citing many more examples and we have not even addressed the New Testament authors, many of whom dramatically changed the parameters of what is or what was becoming the Bible. Furthermore, the Bible itself, as it was formed, even preserves variant responses to our question ‘what is the Bible’? To take one example out of many: Paul’s dispute with his Jewish brethren as depicted in his letter to the Galatians (circa 54-56 AD) is not only one centered around the reinterpretation of the figure of Abraham, but the whole ‘biblical’ story. Paul’s hypothetical answer to the question ‘what is the law and the prophets?’ (since the Bible was still not created) would have not only clashed with the Judean church’s response (as depicted in the Galatian debate), but also with the responses from the chronicler, our 7th century BC Levite priest, the author of the book of Ezekiel, and even of Isaiah, although Paul cites this text to support his gospel (reading Isaiah through a new interpretive lens). These examples can be duplicated hundreds of times. What becomes apparent from this brief survey is that the modern response to ‘what is the Bible?’ is not at all equivalent to asking about the nature of each of its independent texts before the Bible was? In other words, what the Bible is for our modern culture is vastly different from what the scroll that would become the book of Leviticus was to its author and community, and this example can be duplicated hundreds of times when we look at the texts that eventually became the Bible independently and on their own terms. What the Bible is, therefore, cannot be reduced to an interpretive framework imposed by later generations of readers, but must be answered with respect to the pre-biblical texts themselves, each of which were written independently to address the specific needs, concerns, and beliefs of specific communities living in different geo-political worlds and time periods.

Read the rest of this blog HERE