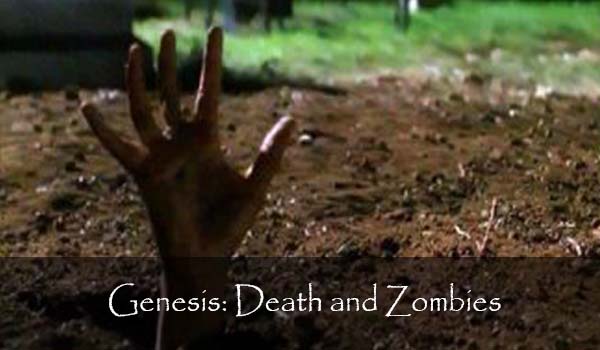 Christians, Muslims and Jews often miss a very important point, the Bible doesn’t say very much about death – certainly not enough to support three religions. In a video lecture entitled ‘Five Big Words from Genesis that shaped Ancient Hebrew Thought’, Professor James Tabor made a very interesting point: that when Genesis says you´re dead, you stay dead and he’s right – or is he?

In fact, when you start looking, it is obvious that the writers of Genesis were very careful exactly how much they said, or didn’t say, about death. Why you may ask!

Well Hebrew spirituality wasn’t born in a vacuum. As it turns out, Genesis was written as a visceral rejection of the Egyptian class-based obsession with death. In many ways the Egyptian religion was a death cult; it was only the rich who got to live beyond death. The Hebrew people wrote the Torah to put the story straight.

But here’s the thing, you can’t read the book of Genesis literally – you can’t take what it says at face value. How do I know?

Because Genesis tells you, right at the beginning, that you must look deeper than the words. The Rashi (Rabbi Shlomo Yitzchaki ) noted, in 11th Century France, that the first word of Genesis, b’reshit, cannot be explained – it shouldn’t be there.

Which begs the question, why does the oldest, most accurately, and most often, copied book in the world contain a grammatical error in the first word that is untranslatable and is obviously a grammatical mess.

Rabbi Jeff Goldwasser wrote a wonderful blog on this subject that you can read HERE and he renders the words (B’reishit bara Elohim)  thus: “In the beginning of the beginning that is always beginning, God created the creation that is still.”

I would argue that the Elohist writer of Genesis 1 put this grammatical error into the text at precisely this point because he is telling the reader, right at the beginning, to look deeper than the text. Please bear this in mind as we proceed.

Before humans are even mentioned in Genesis, the writer makes it clear that even fish are alive (hai’yah – a thing that has life) and it is the Nephesh of that fish that has life. What is the Nephesh you may ask – where does it come from? It has often been translated as ‘Soul’ but this is problematic. When we say ‘Soul’ people think of an invisible ‘you’ that exists eternally; this is a view familiar to Greeks and to Hindus but this was precisely not what the Hebrews were saying. The word Nephesh ‘kind-of’ means breath and humans have the same Nephesh as the animals.

But ‘To Breathe’ or ‘Breathing’ is not all the word means – the implication is ‘An Entity or Creature’.

“And he is forming, Yahweh/Elohim the human from the soil from the ground and he is blowing into his nostrils the breath of life and he is becoming a human living entity.”

Some scholars have tried to say that it is only the breath that is alive and when we stop breathing we are just dead – ‘end of’.

Indeed, it was this view that I grew up with over a half century ago.

It has been a popular view amongst Christian, Muslim and Jewish scholars that the Jewish Bible holds a monistic view of human life; that man is not composed of two elements (body and soul) but that man is rather a psycho-physical organism. Indeed, this view is popular among atheists and Neo-Darwinian Evolutionists today. They think that we are just temporary machines – which in Hebrew is Golem but Golems lack self-awareness – they lack the ability to choose between Good and Evil. For more on this subject, read this BOOK.

It must also be noted that the Hebrew people were not idiots; they knew that babies are alive before they take their first breath and similarly they knew that we don’t just end.

Professor Herbert Chanan Brichto said, “Why has a millennium and more of good Bible scholarship failed to discern the basic view of afterlife permeating Scripture? For the biblical evidence for immortality presents a model of the afterlife which would have constituted a rebuttal of resurrection.”

The metaphor of God breathing into clay is an answer to the question, ‘How do we live’ – we are dead clay animated by the essence of God – our life is God’s life.

This is further demonstrated by the word Ga`va at the end of life, “He breathed out his life” with the clarification “to return to his people.” Obviously, the writer could easily have said, “He just died” if he wanted to.

In the book of Koheleth (The Teacher – Ecclesiastes) it says: “And the Dust returns to the Earth (and leaves it) as it was, and the life-force (Ruach) returns to God who gave it.”

It is evident that the Hebrew understanding of life was not just an idea entirely focused on the self as was the Hindu, Egyptian and Persian concepts of the ‘Soul’ or ‘Self’. Rather the Hebrew understanding is that all life is a part of, and expression of, the essence of God. This fundamentally changes our relationships with ourselves and the world around us.

In 1 Samuel 28:11-14, King Saul goes to woman who could summon the dead and spoke to the ghost of Samuel. This story rests on three pillars:

It is evident then that the Hebrew people had a much more nuanced understanding of life, and of life before/after death, than people may realise but what is also evident is that they were deeply aware of the danger of building our life on the idea of a life to come.

We can conclude then that the Book of Genesis was specifically written to guide the Hebrew people toward a life-based, life-affirming religion as opposed to the Death obsession of the Egyptians and the nihilism of the Persians.

Unfortunately, this rather profound and subtle understanding of life and death did not really satisfy the Hebrew people of the Second Century BCE after suffering one invasion after another. No longer were they going to accept the blame for all the suffering of the Jewish people based on their ‘supposed’ sin. The Scribes had to come up with a more palatable story – and boy did they!

Sometime around the Second Century BCE, the Pharisee sect came up with the idea of the Resurrection of the Dead. They blended this absurd belief onto the already existing belief in the appearance of a Jewish Superman they called the ‘Moshiach’ – a military leader who would save Judah and establish a physical Judean hegemony over the whole world. In this Armageddon part II, the Jewish dead would rise out of the graves and live again.

Unfortunately, the introduction of the doctrine of the Resurrection of the Dead re-introduced the human preoccupation with death and the promise of the next life, which was why so many Hebrew religious teachers rejected it.

Professors Funk, Borg and Crossan, of the Jesus Seminar, concluded that the Jesus of History, like other prominent Hebrew religious leaders in the early first century CE, did not believe in the Resurrection of the Dead.

Indeed, the Jesus of History’s teaching conformed to the essence of the Torah and tried to push people to focus on this life and not speculate on death and the life to come. He said, “Have you found the beginning that now you look for the end?”

Of course, the concept of the physical resurrection of the dead is ridiculous and this doctrine alone has singlehandedly created billions of atheists over the years. My own father, a convert to Catholicism, was terrified to have a medical procedure as it would mean the removal of a body part, “What will I do at the Resurrection?” he whimpered.

So was Professor Tabor right? Do we die and then stay dead until the Last Day and the Resurrection of the Dead?

To be honest, you could read the text and find whatever answer you like and people do every day. But I would argue that, if you read the Hebrew original and try to understand it, the only philosophical paradigm that is consistent with the earliest Hebrew texts is the paradigm contained within the Q-Source that we call the words of the Jesus of History.

In the modern world, we think ourselves so clever. Some Muslims blow themselves up because they are convinced that they will get paradise when they are resurrected. Christians are convinced that the world is a maximum security prison and only they have an escape plan. Buddhists see life as a cheap package holiday; they just want to go home and never come back – given the chance they will just stay in their hotel room for the rest of their lives. Atheists believe that life is an accident and they are their own god.

So maybe, just maybe, the writers of the Book of Genesis were much smarter than we think! When the Pharisees introduced the idea of the Resurrection, they did not realise the hell on Earth they were bequeathing to the world.