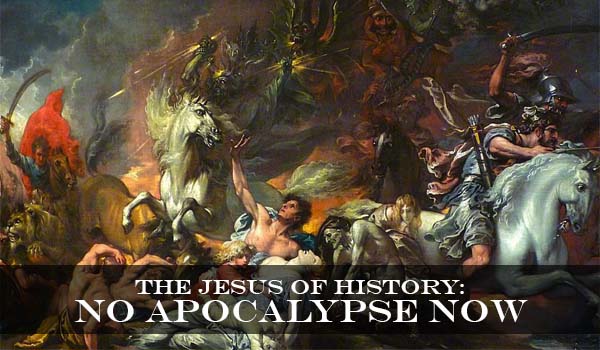 It is a fact that for Christianity to be true, the Jesus of History must have been an Apocalyptic Teacher.

In this blog, I will demonstrate that the Book of Revelation conclusively proves that the Jesus of History was not a believer in the Apocalypse nor was he a teacher of this absurd idea.

So what is ‘The Apocalypse?’ and ‘who came up with such a silly idea’, you may ask.

In the Judea of the First Century CE, the ideas of the Resurrection of the Dead and the Last Days were not new. Culturally speaking, they had been a background hum for a long time.

Variations of the idea of the dead coming back to life had been popular in the Middle East from at least 2630 BCE, with the building of the first Egyptian pyramid. The Persian prophet Zarathrustra (Zoroaster) is believed to have taught a version of the Resurrection of the Dead and this doctrine still forms an important part of the Zoroastrian religion today.

During its long history, the land of Judah had been a part of both the Egyptian and the Persian Empires so it would have been inevitable that the idea of the physical Resurrection of the Dead would have been familiar to the Hebrew people in the First Century CE.

It is also possible that the Judean elites brought these ideas back with them from Babylon in the Sixth Century BCE. However, beliefs, like stupidity, are contagious but often go undetected until events give them form.

Which may be why it wasn’t until after the Greek invasion of Judah in the late Fourth Century BCE that the ideas from the Dualistic Religions of the Middle East started to become popular amongst a small group of Jewish elite, known today as the Pharisees and now Rabbinical Jews.

Slowly the focus of Pharisee religious life swung from righteousness for its own sake (Torah) toward a preoccupation with the coming military leader (Messiah) who would herald the last days and the Resurrection of the Dead.

It was Saint Paul who first took the strange Egyptian/Persian idea of the Resurrection of the Dead and turned it into what Christians call ‘The Rapture’. His Jesus Christ was, and is, vital to the Christian Apocalypse as he was supposed to be the Christian version of the Jewish Messiah. It is for this reason that ‘Messianic Christians,’ who like to pretend that they are Jews, also insist on Jesus as an Apocalyptic Teacher.

So what is the problem?

In his controversial book, ‘The Jesus Dynasty’, Professor James D. Tabor insists that both the Jesus of History and John the Baptists were, in the Jewish sense, Messiahs; both of whom, he claims, believed in the Apocalypse and the divine establishment of the Kingdom of God.

Taking the contrary position, I have argued, in books and in published papers, that the Jesus of History was not an Apocalyptic Teacher simply because he said so.

I will not bore the reader by repeating the proofs in detail here but suffice to say that I have made the point that the words, contained in what we can loosely refer to as the Q-Source, directly contradict the concept of the Apocalypse based on the inherent meaning of those words (Philosophical Coherence).

In my own defence, the Jesus Seminar and its Professors: Funk, Borg and Crossan, also confirm that, based on his own words, the Jesus of History was not a teacher of the Apocalyptic doctrine.

So I have argued that the ideas of the Jesus of History are not compatible with the doctrine of the Apocalypse but the problem is that a lot of people lack the ability to comprehend philosophical coherence and therefore cannot understand my argument.

In the modern world, people have been taught to be quite happy believing two contradictory ideas at the same time; like believing that consensus proves a hypothesis to be true but also acknowledging, at the same time, that the peer review system is hopelessly broken. To people like that my argument is beyond them.

Thankfully, help is on the way!

Third Party Proof that the Jesus of History was not an Apocalyptic Teacher.

The Book of Revelation is the final book of the New Testament and most likely dates to the second quarter of the Second Century.

Jewish Rabbis have been aware for many years that the Book of Revelation contains a huge amount of words cut-and-pasted directly from their own Jewish scriptures (the Tanakh). Most Rabbis agree that whoever wrote the Book of Revelation used Jewish words to give his own Greco-Roman ideas a Jewish flavour. Watch Here.

Professor James Tabor recently claimed that he had recovered a Pre-Christian version of the Book of Revelation (the assumption being that Christianity was originally Jewish). To support his claim to the discovery, he brilliantly illustrated the Christian forgery by highlighting the fact that the text would still make sense if you cut out the most obvious Christian insertions. You can read his blog here.

I will include a sample to give you an idea:

Rev 1:1 The revelation [of Jesus Christ,] which God gave [him] to show his servants what must soon take place; he made it known by sending his angel to his servant John,
2 who testified to the word of God [and to the testimony of Jesus Christ,] even to all that he saw.
3 Blessed is the one who reads aloud the words of the prophecy, and blessed are those who hear and who keep what is written in it; for the time is near.
4 John to the seven churches that are in Asia: Grace to you and peace from him who is and who was and who is to come, and from the seven spirits who are before his throne,
[5 and from Jesus Christ, the faithful witness, the firstborn of the dead, and the ruler of the kings of the earth. To him who loves us and freed us from our sins by his blood,
6 and made us to be a kingdom, priests serving his God and Father, to him be glory and dominion forever and ever. Amen.]

Rev 1:9 I, John, your brother who share with you [in Jesus] the persecution and the kingdom and the patient endurance, was on the island called Patmos because of the word of God [and the testimony of Jesus.]

NRS Rev 11:8 and their dead bodies will lie in the street of the great city that is prophetically called Sodom and Egypt, [where also their Lord was crucified.]

Rev 12:17 Then the dragon was angry with the woman, and went off to make war on the rest of her children, those who keep the commandments of God [and hold the testimony of Jesus.]

Rev 14:12 Here is a call for the endurance of the saints, those who keep the commandments of God [and hold fast to the faith of Jesus.]

Rev 20:4 Then I saw thrones, and those seated on them were given authority to judge. I also saw the souls of those who had been beheaded [for their testimony to Jesus and] for the word of God. They had not worshiped the beast or its image and had not received its mark on their foreheads or their hands. They came to life and reigned [with Christ] a thousand years.

Rev 22:16 [“It is I, Jesus, who sent my angel to you with this testimony for the churches. I am the root and the descendant of David, the bright morning star.”]

Rev 22:20 The one who testifies to these things says, “Surely I am coming soon.” Amen. [Come, Lord Jesus]

So far so good for the beloved Professor, but there is a problem.

What does this prove?

In fact, the Christian literary fraud, in the Book of Revelation, proves the opposite point than the one Professor Tabor hoped. It proves that Early ‘Christianity’ (defined by its own terms) had nothing to do with the Jewish people beyond the fact that the words of their sacred scriptures were stolen by Greco-Romans to validate their new cult. It also proves beyond doubt that the Jesus of History was not a teacher of the Apocalypse.

After all, consider these points:

Not only do the actual words of the Jesus of History directly argue against the doctrine of the Apocalypse, we can now see that Book of Revelation is prima facie evidence that early Christians could not have been Jewish and that the Greco-Roman conmen behind the Christian cult were not only using the words of the Jesus of History to promote their cult, they were more than happy to use the apocalyptic texts of the Judean Hasid (like the Dead Sea Scrolls) to further add Jewish sauce to their Greco-Roman confection.