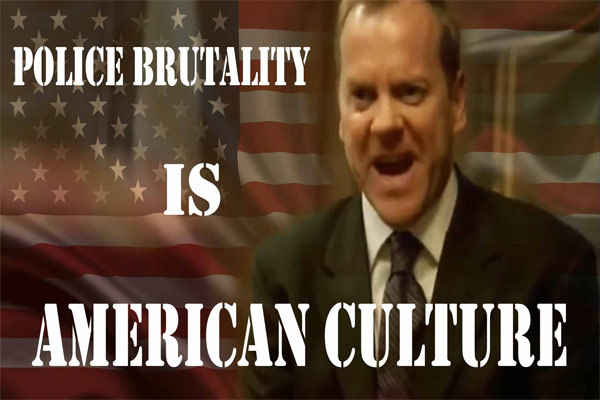 Police Brutality is rarely a symptom of racism. Not anymore  – It hasn’t been for a long time. Neither do the American police have a monopoly on ‘Brutality’. The truth is there is a problem with the police all over the Western, First World, nations! In fact, in every country that has been exposed to popular American culture there is a problem with pointless police violence.

It’s obvious that Western Civilisation is dying from a cancer but anti-black racism has nothing to do with it! Police brutality is a symptom of a, much deeper and more malignant, form of cultural cancer and it’s a cancer that will kill us all! ANTIFA and Black Lives Matter are just distractions. They offer no real solutions. They have never – and will never- put an end to violence and brutality. Why? Because ANTIFA and BLACK LIVES MATTER love violence! As long as they are the ones doing it. American popular culture isn’t addicted to racism – it’s addicted to brutality.

So how did American culture become so depraved? To understand that we need to look at these two examples:

Ultimately, the new German story will prove to be much more dangerous than the first – both to Germany and to the rest of the world – but no matter what evidence is presented to the German people, they continue to vote for politicians who spend all of their time and resources destroying their own country and, in the process, European civilisation.

We can see from this example that people, both individually and collectively, are the sum of the stories they believe and the prejudice of their beliefs make it almost impossible for them to look at any fact that contradicts their internal narrative.

It is obvious then that in order to understand how Brutality got to be a fundamental part of American culture we need to go back to the beginning of America and look at the stories the early Americans believed.

The original European settlers of the American continent were followers of a Frenchman named Jean Calvin. Some were called ‘Separatist’,  later they were called ‘Puritans’ but all of them were Calvinists. For those of you who are not aware, Calvinists believe in the Five Points of Calvinism:

P: Preservation of the Saints 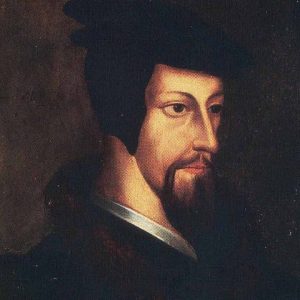 They believed, among other things, that they alone had been chosen by god to be saved. They believed that Christ had only died for them and not for all human beings. They also believed that no matter what evil they did, they would always go to heaven. Calvinism is a kind of spiritual supremacy that was the background colour over which the American dream was painted. Genocide and slavery were an inevitable product of this corrosive belief.

It is also true that the when the American colonies divorced themselves from the aristocracy of their European homelands, they lost any sense of chivalry. The vast majority of settlers were from working class backgrounds. Finding themselves alone within a hostile country they naturally reinvented themselves. What they lost was the flower of European civilisation – the art of self-restraint – known to Europeans as ‘Chivalry‘.

Over thousands of years, European aristocracy had turned violence into an art and Chivalry was a code, like the Japanese code of Bushido, that existed to restrain and channel that violence into something positive. Chivalry was based on the belief in the idea of self-restraint and self sacrifice. During the 19th and early 20th century Chivalry became enshrined and promulgated through sport.

In England, prior to the turn of the 20th century, young men were taught that a gentleman competed for the love of the sport. To a gentleman winning and losing were all the same. Anyone who has actually competed in sport – particularly the martial arts – will confirm that someone else being ‘less’ than you on a particular day doesn’t necessarily imply that you are ‘more’. The code of Chivalry teaches that your abilities are between you and God. To make someone else feel inferior just so you can feel good would be unthinkable. 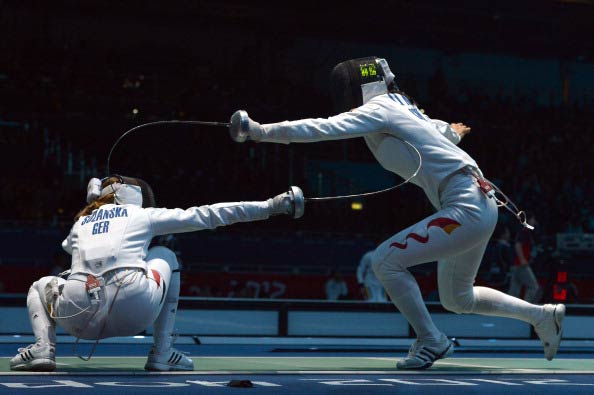 Today – the only thing that matters is winning. Nobody cares about the ‘loser’ – nobody cares about the art. Young Americans are taught that only ‘winning’ matters. The greatest insult to an American is to be called a ‘loser’ and this obsession with ‘winning’ has destroyed sport and in the process civilisation.

Take as an example sword fencing. Originally this was a deadly art whose beauty was remarkable. Now Olympic fencing, in all disciplines, is just an athletic game of flick, stab and poke. The electric scoring system awards a hit split seconds apart, the faster person becomes an Olympic gold medalist. But, in reality this obsession with winning has turned suicide into a sport.

The great warrior Winston Churchill put it best when he said:

In Peace: Good Will

You only have to watch the Olympics on television to see that in competition we cheat. In defeat we are petulant. In victory we are insufferable and in peace we are self aggrandize. Without class or restraint – it was inevitable that America developed into a ‘Bully’ culture. If we make a god out of the ‘self’ there really is no room in the world for anyone else but one’s self.

A bully is defined as

Does that sound familiar to anyone? It should! With the advent of mass media – American culture has spread bully culture  around the world like a Virus.

The TV Series 24 with Kiefer Sutherland is a perfect example of Bully culture. If you’ve not watched the series – I would recommend it –  the story revolves around Jack Bauer,  a Counter Terrorist Agent – working in Los Angeles. He is a weak man who sucks up to his superiors but bullies anyone he has power over. His wife and daughter are narcissistic morons but Jack lacks the moral  character to restrain their selfishness. And this is where we see a similarity to ANTIFA and BLM – Jack Bauer justifies his psychopathic violence because of his belief in ‘the president’ (a fantasy not justified in the story as fool is invariably sold out by a list of weak and ineffectual presidents).  In the same way ANTIFA and BLM justify their violence by creating the myth of white supremacy.

Living in a ‘Bully’ culture – Americans mistake pointless aggression for masculinity. Whoever shouts the loudest is the boss. Perhaps because of their hatred of the English, any form of politeness is seen as somehow effeminate and a sign of weakness. Have you noticed that nearly all the ‘Badies’ in American films have an English accent?

African culture, like American culture, was and obviously is based on the violent subjugation of the weak. We only have to look at the BLM riots today to see how true this is.

The Zulu empire enslaved the Nguni and Khoisan tribes. The Europeans didn’t catch slaves in Africa – they bought them from African kings. Those Kings had already enslaved other Africans.

Why is it that young black men are fed a diet of black role models whose greatest dream in life is to be a pimp with street ‘cred’ and get paid for doing nothing . George Floyd died because Black people have been encouraged to be a part of Bully culture. To believe in the story of violence.

This begs the question – Why is the mass media feeding the world such a corrosive world view that will inevitably result in either genocide or civil war?

The Jesus of History taught us that: ‘For where your treasure is, there your heart will be also.’

Calvinism gave America a story that made them treasure the ‘Self’ above all things. Lacking restraint and self-discipline the American obsession with the ‘self’ led to coarsening of Western civilisation.

We can’t build a sustainable future based on lies. European and White Americans left racism behind a long time ago. They fought wars to end racism and slavery – that is the truth.

Even if all the white people in the world committed suicide tomorrow – that would not stop brutality and violence.

Unless we give young men heroes to look up to they will spend their lives looking down!