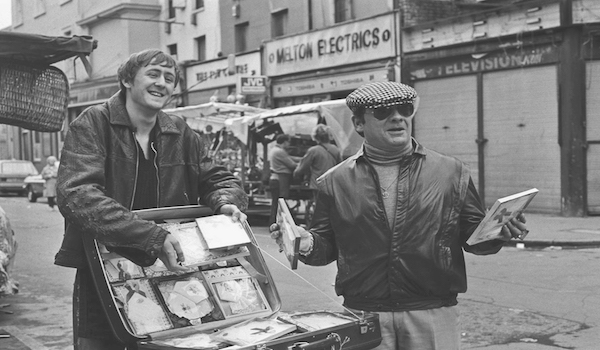 by Shelley with No Comment Forensic Textual AnalysisJesus of History

After the Second World War, the peculiar culture of the East End of London began to spread along the north bank of the Thames like gangrene on a septic wound. It infected that ancient countryside and turned it into an urban wasteland of narcissistic stupidity. The new town where I served out the sentence of my youth had a weekly market. It stank of rotten fish, stale burgers, and sweat. In the centre of this concrete prairie a city of tented stalls would spring up overnight like a reoccurring rash. One stall near the centre, larger than the rest, had become almost permanent. Within it, hard men with shaved heads performed their carnival of greed and false bargains every Wednesday.

The circus master, in our weekly pantomime of greed, would shout:

“Alrite love! Cat got ya tung – step up. If you cant spot a belter then him over there will!”

He would aggressively point to one of his planted men at the back of the massive crowd as, on cue, the man opened his bursting wallet. The ‘old-before-her-time’ Doris would smile hesitantly and the crowd would push forward swallowing her up like a cancer on healthy flesh. Evangelical preachers often remind me of the aggressive and clever conmen of London town. They rattle off quotes from all over the Bible as if it were one book written by King James himself. The textual barrage, just like an enemy gun emplacement, is intended to intimidate you and keep you off balance. Just like the market stall men of my youth, their success depends on your ignorance.

In opposition to this approach, I would like to offer you some points to consider and mediate on. I will show you that the New Testament was written by a variety of authors separated from Palestine, in the first half of the first century, by geography, time and culture. I will go further, I will show you that what we call Christian theology is the exact opposite of what the historical Jesus taught. I will offer you an insight into a philosophical paradigm hinted at within the few documents that remain to us. Mark 7.31 in the Greek has Jesus “…go back out of Tyre, he went through Sidon, down to the ten cities…” This would be like saying that he left London to go to Calais via Aberdeen. By the time the King James Bible was created from Jerome’s Latin Vulgate a scribe had tried to correct this error by inserting “…departing from the coasts of Tyre and Sidon, he came unto the sea of Galilee, through the midst of the coasts of Decapolis…” This makes more sense but is still an unlikely detour of hundreds of miles.

Unfortunately, there are many more errors in the Gospel of Mark. Mark 10.1 has Jesus leave Capernaum (which is on the north shore of the Sea of Galilee) and go to the coast of Judea “by the farther side of the Jordan.” The problem with this is that Jesus would have been heading toward the Arabian desert and going in the wrong direction. Mark states (Mark 5.1) that country of the Gerasenes was on the east bank of the Sea of Galilee. No such city existed. Also, none of the Synoptic Gospels agree on the name of the location. Unfortunately for Joseph, there is no such place as Arimathea in Judea.

More Errors in the Gospel of Mark

Putting geographical errors aside, there are cultural and religious errors in Mark, which suggest an ignorance of Jewish culture and religion. For example, in Mark 1.2 the original Greek read, “As it is written in Isaiah the prophet, behold, I send my messenger before thy face, which shall prepare thy way before thee.” This is not written in Isaiah but is a paraphrase from Malachi 3.1. Later editions of the Bible hid the error and inserted “In the prophets it is written.”

The next cultural mistake can be found in Mark 2.25 where Jesus says, in his own defence, that in a time of war, King David ate the sacred bread in the time of Abiathar the High Priest. There are two problems with this section: one is the fact that Abiathar was not the High Priest at this time and the second is that Jewish law does, in fact, allow for the eating of sacred bread in a time of war. A Jewish audience would have known this. It was already the position of the Jewish religion that the Sabbath was made for man and not the other way around so this would have been a pointless statement in Judea or Israel.

Mark 7.5 has the Pharisees ask why the followers of Jesus didn’t wash their hands before eating but this restriction was only placed on priests of the temple at the time of Jesus, not the laity. The question would have been irrelevant. This Mitzvah came into fashion in the schools of the Pharisees. They adopted the ‘eighteen measures’ just before the fall of the Second Temple (70 AD). The earliest texts of the Gospel of Mark ended at verse 8 – with only an empty tomb and no resurrection. Several hundred years later, a helpful scribe added another 12 verses in order to harmonise the Gospel with the new position of the Church. They had just narrowly voted Jesus into a God.

The Other Gospel Writers

If not the Gospel of Mark, what of the others? Matthew and Luke copied from Mark so they hardly count as independent sources. The Gospel of John was written around 120 AD by a Greek. He takes Paul’s Mithraic God of blind faith and his fatal misunderstandings of Isaiah and thoroughly Hellenises Jesus into an Orphic mystery God who sacrifices himself to himself and is celebrated by the eating of his flesh. He has Jesus condemn the Jews as Satanic, which is highly unlikely as Jesus was Jewish.

I mention these errors only to illustrate the fact that the Synoptic Gospels cannot be relied upon. They were written by men who had their own agenda and bent the text to suit themselves. We have to use our common sense to find the clues as to what might actually be a saying of the historical Jesus. If we assume that Jesus was not insane, his teachings must have been internally coherent. It should be possible to discern some echoes of the real teachings of the Jewish Rabbi amid the pagan extrapolations. Indeed, I found this to be the case.

In order to find out what Jesus might have said, I hit on the idea of using the character of God as a litmus test. If we look at the Q-Document, which many scholars agree may have been the notes that Mark inherited from Paul, there is a correlation between the visions of God described by King David, King Solomon, Jesus and his brother James. Many Hebrew scholars agree that this version of God is from Israel and is called the Elohist vision of God. This God is the essence of all and is the light that animates all life.

“...and you will be children of God. For he makes his sun rise on the evil and on the good; he sends rain on the just and on the unjust.” Luke 6.

God does not judge us; we judge ourselves.

“Be merciful even as your Father is merciful. Don’t judge and you won’t be judged. For the standard you use [for judging] will be the standard used against you.” Luke 6.

“Let no one, when tempted, say: I am tempted by God. For God cannot be tempted by evils, and himself tempts no one. But every one is tempted by his own desire, being drawn away and seduced: then desire, having conceived, brings forth sin, and sin, having been perfected, brings forth death. Be not deceived, my beloved brethren. Every good giving and every perfect gift is from above, coming down from the Father of lights, with whom there is no change nor shadow cast by turning.” Epistle of James.

I would posit that the Elohist (for want of a better term) was the earliest view of God held by the Semitic people. There is evidence that Essenes, the Nazarenes and the Ebionites all shared a rejection of parts of the books of Moses and held them as being forgeries. So when Galileans say “the Law” it is not necessarily the same “Law” that modern Rabbinical Jews would recognise as the law. In modern Kabbalah we see the mirror of this vision of God and find clues as to what Jesus might have meant in his most famous sayings.

The Synoptic Gospels struggle with the fact that Jesus was part of a religious and philosophical movement that was already old when he was alive. It continued after he died. The students who were left alive believed that he was a prophet and in many ways an anointed man. It is the word ‘anointed’ that Paul translated into Greek as ‘Christ’. James, the brother of Jesus, was Paul’s greatest rival for the reason that Paul’s new gentile cult subscribed to a doctrine that was the opposite of his own understanding of Nazarene teaching.

So it is within the teachings of this movement that we must look for the words of Jesus but we must first understand Jewish thought if we are to understand what Jesus meant by his teachings. The Jews of the first century saw the obligations of law (Mitzvah) as a way to reach God. The obligations of law were a blessing and in no way were they viewed as a burden as Paul insists ad nauseam. Paul quite liked the fire and brimstone of the Judean God of judgement and sacrifice. It is the dichotomy of these two visions of God that has caused so much suffering over the years.

Not really a Bargain

Just as there are no real bargains in a London market, there are no easy answers when it comes to Jesus. Just as East End culture has infected and corrupted English culture so too did the Greeks and Romans of Paul’s Gentile Christian movement mutate the teachings of the Nazarenes into their opposite. We can find a few diamonds within the Q-Document but only as far as they resonate with Early Jewish Christian documents like the Gospel of Thomas, Mary and Phillip, the Epistle of James and the Teachings of the Apostles to the Gentiles.

To paraphrase King Solomon, “A fool believes but a wise man understands.” No belief can bring salvation. Jesus taught that only the hard struggle of experiential knowledge and self-transformation can bring the peace of the Kingdom of God.

The next time you hear a slick Christian Apologist trying to sell his audience salvation for the ‘one time’ low price of belief, just ask yourself is there really a bargain in the box or is it a cheap fake.

Read the Research Paper: What did the Jesus of History Really Say: The use of forensic textual analysis based on philosophical coherence