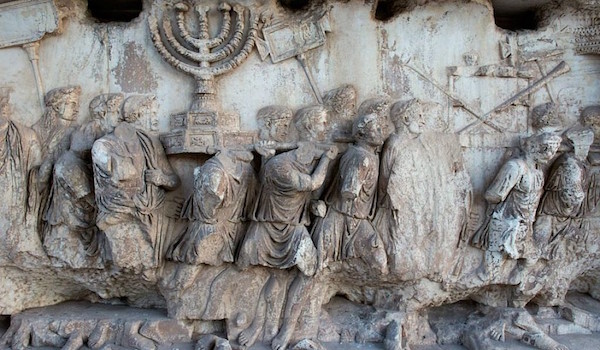 In the first century, Judea’s days were numbered and after the first Jewish-Roman war ended in 73 AD the Romans were fast running out of patience. The Bar-Kokhba revolt of 132-136 AD sealed its fate. The Judean people were scattered over the face of the known world. Jewish nationalism and xenophobia turned inward and whispered quietly to itself in a language it hoped that no one else would understand. (Ref 1)

The group we now call ‘Pharisees’ became Rabbinical Judaism and over the next one and a half millennia, the Rabbis brainwashed their own people and the world into thinking that there was only ever one legitimate form of Judaism and everything else was ‘idolatry’ and ‘filthy fornication’ – a childish and lazy slander but nevertheless effective. Just as Christians silence any suggestion of their Jewish roots with a Pavlovian shout of ‘Legalism!’ So too do Jews recoil from any suggestion that Jesus was in fact a Jew. (Ref 2)

Unpalatable as it may be to some, but the truth is that prior to the cataclysmic events of the first century, common Jewish religious belief had stubbornly resisted the religious fanaticism of its own elites. I believe that the historical Jesus was a part of a popular religious movement and an Israeli religious school, which was firmly based in a uniquely Jewish vision of the universe and that this vision has survived hidden within the secret texts of Kabbalah to this day. Further, it is my contention that there is a relationship between the original Israeli understanding of God expressed in the images of ‘El’ and ‘Asherah’ and its modern counterpart in the eternal God and the Shekinah spoken of within modern Lurianic Kabbalah. (Ref 3)

So why would I say such a thing? Modern Jewish thought and in particular several prominent Rabbis teach a vision of God which is without form and beyond all thought. Rabbi David Aaron, when speaking to liberal atheists, is fond of saying, “the God you don’t believe in, I don’t believe in either!” The horrific and violent Yahweh of the Torah is neatly sidestepped with the simple literary device of asserting that the stories don’t mean what they say they mean. A sensible but somewhat cowardly and disingenuous retort. But what if there is a deeper story hidden behind this paradox? What if, with the fall of the Jewish homeland and the rise of Rabbinical Judaism, it became too dangerous to express any vision antithetical to the opinion of the victorious Pharisees. What if the Israeli vision of God had to be hidden in order to protect it from the Judean elites? (Ref 4)

After the death of King Solomon just after the turn of the first millennium BC, the tribes of Benjamin and Judah split from Israel and set up a new capital in the south called Jerusalem and named their country Judah. Around this time the Judeans rejected ‘El’ of Isra EL and adopted a new form of God. (Ref 5) There is more than one kind of ‘God’

Yahweh was the mirror image of Marduk, a cosmic superman. This new Judean God was frighteningly capricious, prone to bouts of senseless anger, jealously and murderous rage. Where ‘El’ was without form and everything, Yahweh was a physical being. Yahweh was originally represented anthropomorphically. Where ‘El’ created through ‘word’ (Bara), Yahweh fashions with his hands (Yeser). (Ref 6) The worship of El and Asherah was focused on the mountain tops and wild groves, not in temples. Incense and olive oil was offered on a stone pillar. Asherah is represented to this day by the Menorah, describing as it does the unity and common source of all life. As God could not be grasped or seen by mortal man, angels were the messengers of El. El appeared to Moses as a light supported on the wings of angels. From the time of Jacob, the worship of El had been at Shechem in the north of the Jewish homeland. (Ref 7)

“The hosts of Heaven” is a euphemism for the study of phases of the moon and the procession of the Zodiac through the agricultural year. Internal textual and external archaeological evidence indicate that the original religious belief of the Jewish people was expressed within the images and ideas surrounding the God ‘El’ and an understanding of the hosts of heaven.

To summarise, I believe that this ‘Elohist’ vision of God as the ‘All’ and ‘Disincarnate’ within which all life is united was possibly one of the oldest and most popular among the common Jewish people, as we have seen in my ‘True Sayings of Jesus’ lecture series, the teachings of Jesus only make sense in the context of the Elohist religious framework.

I suspect that after the murder of Ya’akob, the brother of Rav Yeshua, in the Temple in Jerusalem, this popular Israeli Yeshiva went underground and eventually resurfaced in the twelfth century as, what we now call, Kabbalah.

Obviously, after fifteen hundred years the distinctions between Yahweh and El have been eroded to the point where they are virtually indistinguishable. Unfortunately, this leaves the forged stories of the Judeans inculcating the horrific Babylonian God Marduk with his anger and punishments that, to this day, are used by people all over the world to justify cruelty beyond imagination.

If you enjoyed this blog, then you might like: Two Gods and Two Countries and Are there two Gods in the Bible?