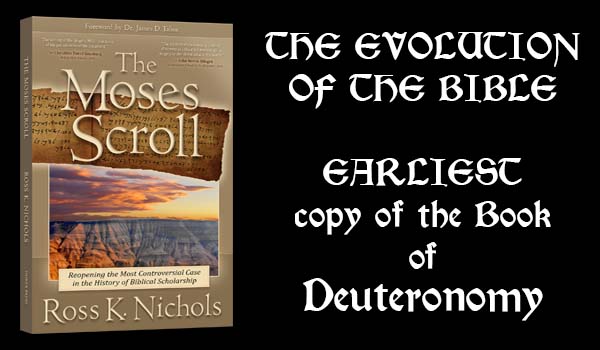 The earliest copy of the book of Deverim (Deuteronomy) is evidence of the evolution of the Bible. Why is that important?

For anyone who has not already watched our DocuVlog review of Professor Ross K. Nichols’ new book “The Moses Scroll”, go to our YouTube Channel and watch that HERE.

This short blog is designed to address the obvious question, “Why should we care?”

All three Abrahamic faiths, Christianity, Judaism and Islam, are based on a literal interpretation of the Bible – the belief that the Bible contains – word for word – the words of God.

Over the last two hundred years, many of the people in Western countries have become atheists in reaction against this religious literalism.

Unfortunately, the loss of God has proved a disaster for Western civilisation.

The existence of the Moses Scroll demonstrates that, in reality, the books of the Bible evolved with the Hebrew people. Those texts directly reflect the changing socio-political interests of powerful groups within the Judean elite and their need to control the Hebrew people through a manipulation of their beliefs.

In the text of Shapira’s scroll, we see a text largely without reference to the Judean God Yahweh from the Negev desert. He is only mentioned by the editor at the beginning and the end of the Book. This demonstrates the evolution of Elohist theology into the Yahwist and confirms the position that the Jesus of History took against Judean literalism. We know from Epiphanius of Salamis that the religious school to which the Jesus of History belonged (Nazareans) believed (as did the Essenes and the Samaritans) that the Judeans had forged the Bible.

Interestingly, the text does not contain the openly xenophobic tone of the later versions.

Like the teachings of the Jesus of History, the text is almost entirely concerned with our inner relationship with our selves and God.

In light of the Moses Scroll, we can say that the Hebrew Bible is a record of a people’s struggle to find God and themselves within a changing and challenging world. We must test our weight on each line, as a climber tests a handhold because each line may contain a profound spiritual insight or it might be the evidence of an ancient evil. Reading the Bible without first engaging our commonsense has and will lead to madness.

That being said, the Moses Scroll suggests that maybe the God that atheists don’t believe in never really existed.