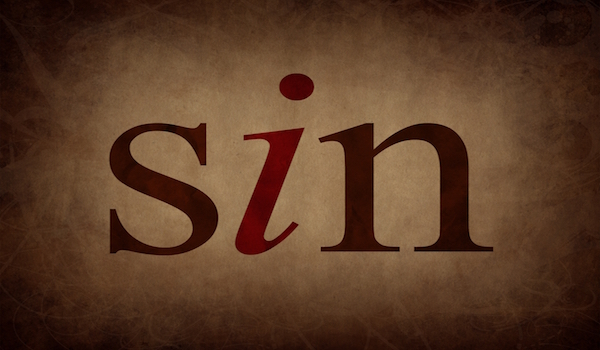 but Joan Bakewell the famous face of the British progressive left, recently and unwittingly spoke for Jesus when she had the courage (or stupidity) to suggest that anorexia is a product of our culture’s self-obsession.

“But since when is anorexia a sin?” I hear you quite rightly ask.

There does seem to be a lot of confusion about what ‘sin’ actually is. Most people will quickly answer,

But then we would have to ask, “Whose law?”

In America it is now a sin, punishable by death and up to a hundred years in solitary confinement, to be born white and male. The Twitter mob proscribe new words every day. What you could say yesterday is a sin today. In Twitter land, I have committed a sin by even thinking that.

The Prophet Muhammad obviously foresaw the rise of the Twitterarti and he said,

“I speak for God. What I say is a sin will be a sin forever!”

At this point, it is important for the Twitterarti to note that the Prophet got last dibs and no crosses count!

Islamic law (Sharia) in many ways is similar to Jewish law (Halakha) so why can’t we just leave it to those two religious heavyweights to sort it out? If you’ve asked that question, you’ve obviously never seen anyone stoned to death. If we follow the letter of the holy books we would have to kill people for gathering firewood on Saturdays and execute our daughters for getting raped.

What about the Christians you cleverly ask!

Unfortunately, the Christians are not sure if ‘sin’ is something you catch, are born with, or something you do! The only thing they are sure of is that you’ve done it and you need their help.

“Ok then! We give up! What did Jesus teach, smarty-pants?”

I’m glad you asked! The words that we can reliably attribute to the historical Jesus or at least the religious movement of which he was a part are impossible to understand without first understanding Jewish thought, humour and the Secrets of Kabbalah. This is the reason that the Roman Church quickly gave up trying to understand the Jewish Jesus and concluded that he couldn’t possibly have been serious. When Jesus said, “Love your Enemies as yourself” the Latins shrugged and grimaced and wrote it off as some kind of first century ironic Woody Allen joke.

Rav Yeshua, in the Q-Document, said, “You will be children of God. For He makes his sun rise on the evil and on the good; He sends rain on the Just and on the Unjust. Be merciful even as your Father is merciful. Don’t judge and you won’t be judged. For the standard you use will be the standard used against you.” Luke 6.

James the Just, the brother of Yeshua, goes further. He says, ‘Let no one, when tempted, say, “I am tempted by God.” For God cannot be tempted by evils, and himself tempts no one. But everyone is tempted by his own desire, being drawn away and seduced. Then, desire, having conceived, brings forth sin, and sin, having been perfected, brings forth death. Be not deceived’. Epistle of James.

To understand the profundity of this view we have to understand Kabbalah and to do that we will have study a different Luke. To understand Kabbalah we must look to Luke Skywalker and Star Wars.

Luke Skywalker in the films became a master of the ‘Force’ (sort of! Pretty rubbish really!)

As an engineer who specialises in Electromagnetics and Ultrasonics, I can attest that the world you experience is an illusion created by your senses. You perceive the world as solid because of electromagnetic force. The Rope Hypothesis explains how every atom in the universe is linked to every other atom by means of an electromagnetic rope. One of the reasons that the Star Wars films have been so popular is that we all instinctively know that the idea of ‘The Force’ is kind of true! We really are all connected and, at some deep level, we feel it.

To prove my point, let’s look at another popular movie but to be honest you could choose almost any film that has been produced over the last thirty years. Take the 2015 blockbuster ‘San Andreas’, Dwayne Johnson (The Rock) plays Raymond Gaines, a man of action destroyed by the death of his youngest daughter. The ‘arc of the film’ sees Ray as a lonely man, at the beginning of the film, watching the disintegration of his family. The adventures of the day lead him and his family to find the strength and wisdom to get past his self-obsession, which has pushed his wife into the arms of another man. By focusing on his loved ones instead of himself he finds redemption. We all instinctively know that this is true! This is real! This is how it works!

“But Antonio! How can we ‘all’ possibly, instinctively, feel the same thing?”

The scientists, Marc Bekoff and Jessica Pierce in their 2009 best seller, ‘Wild Justice: the Moral Lives of Animals’ gave us a summary of scientific understanding of animal behaviour. Contrary to the opinion of the famous French philosopher and father of modern thought, Rene Descartes, animals are not just automatic machines without souls or thought. It turns out that animals have an inbuilt morality and sense of empathy that often makes them act in a way that is directly contrary to their evolutionary advantage. Namely, when put in a cage with a button to obtain food most animals would rather starve than push the button and make a friend suffer.

It seems as though all living things have an in-built Burnt In Operating System (BIOS) and instinctively deep down know what is a ‘sin’. Perhaps we are like any work of art and share the essence of our designer?

So if we understand that we are all connected by an electromagnetic force and thoughts are just electricity and if we all have a built in understanding of ‘sin’ then we can begin to understand what the historical Jesus and his brother James were saying and why.

As a people, we tend to look for entire books that explain for us subjects that are as complicated as the idea of ‘sin’. Unfortunately, Jesus and the Nazarenes didn’t teach like that. They taught in Zen Koans. They used short sentences that shocked people into seeing beyond the limitations of the mundane mind.

“If you have ears to hear, you may hear!”

The secrets of the Nazarenes and of Kabbalah can be summed up in a few words but it takes a lifetime to understand them. The Jewish Torah uses six nouns and three verbs to describe sin. Using some of these words perhaps we can now see that Mrs Bakewell was indeed right about anorexia.

When a young person becomes so obsessed with themselves (Raah) that they become anorexic, they have become intoxicated with the idea of self (Shagah). They are causing damage to themselves and their family (Chaah) and they have done something that is ‘morally’ wrong (Rasha) by throwing away their young life. They have (Like Raymond Gaines) put themselves before God and their family (Pasha). Eventually they will become twisted and stricken (Avon). It is important to note that none of these words can really be translated as the word ‘sin’ (as the Christians understand it) and by using that word we fail to understand the profundity of the Nazarene explanation and we will ultimately fail in taking the medicine of their timeless and profoundly Jewish prescription.

Quantum Mechanics For Your Soul: How to Repair Yourself and Save the World at the Same Time