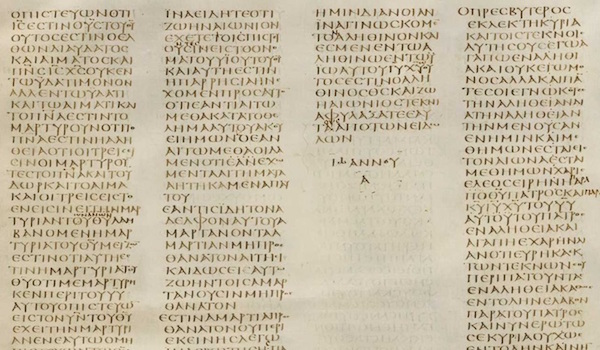 by Shelley
Gospel of John

Many Biblical Scholars believe that the earliest followers of the Historical Jesus (33-55 CE) had written down a collection of his ‘Sayings’ and used them as the basis of their daily Jewish practice. Apparently, they were not interested in (or knew nothing of) the biography, miracle or narrative stories. It is very likely that it was to this Jewish Logia that Papias of Hierapolis was referring (around 130 CE) when he said that ‘Matthew collected the sayings of Jesus in Hebrew’. (Side note: it is unlikely he was referring to the later anonymous Narrative Gospel, which the early church fathers arbitrarily decided to attribute to Matthew as Matthew is a narrative Gospel, in Greek syntax and most likely written much later.) Within the Synoptic Gospels it is obvious that the ‘Sayings’ were copied from a primary external source. The ‘Sayings’ are internally coherent and confirm to Jewish philosophy.

In one of those ‘Sayings’ Luke reports Jesus as saying, ‘Why call me “Master, Master,” and not do as I say? Everyone who hears my words and does them is like a man who built a house on Rock’. As with the rest of the Synoptic Q-Source Sayings, this phrase emphasises that the teaching of the Historical Jesus was based on ‘Doing‘ – on actions we take in daily life. Understanding of the nature of the Kingdom of God comes slowly.

From the brother of the Historical Jesus we have the Epistle of James, ‘But become doers of the word and not hearers only, deceiving yourselves. For if anyone is a hearer of the word and not a doer, he is like a man beholding his natural face in a mirror; he beholds himself and goes away and immediately forgets what kind of a man he was.’

The Gospel of John, on the other hand, marks the point when the Roman Church finally severed any ties with the Historical Jesus or the Jewish movement of which he was a part. It is thought that the Gospel of John has undergone several editions and was composed from at least two sources. It is possible that John was composed from a ‘Signs’ source and the Torah; interestingly, ‘John’s’ Gospel makes no reference to any of the ‘Sayings’ or parables. Written by several writers over several editions in beautiful Greek, it is the work of literary genius but as it attributes the author as ‘The disciple whom Jesus loved’ it makes no serious claim to be anything other than a work of fiction. It is unfortunate that most of the world’s anti-Semitism can be attributed to a literal reading of this work.

The Gospel of John contradicts the Synoptic Gospels on most points that count; the birth of Jesus, his life, his arrest, his death. The dialogue attributed to Jesus is entirely in the voice of the narrator; he makes no attempt to even pretend that he is actually quoting a living man. For example, let’s look at the first chapter of the Gospel attributed to John.

Soul of the World

The doctrine of the ‘Logos’ is entirely a pagan Greek concept popularised in the Roman world by Heraclitus (6 BCE). The Stoics used this term to refer to the ‘Soul of the World’. Marcus Aurelius used it for the general principal of nature = reason.

To be fair, Philo of Alexandria (25 BCE to 50 CE – a Hellenised Jew) tried to build a bridge between the Sepher Yetzirah and Greek philosophy by spinning a Kabbalistic concept into a Greek demigod. When John uses this term to open his book he is obviously addressing Greeks and Romans who are familiar with this term. He certainly was not talking to Jews as they would have dismissed the idea of a demigod out of hand.

In John 1:7 ‘The same came for a witness, to bear witness of the light that all through him might believe’. This statement posits two ideas:

Referring this statement back to the ‘Sayings’ of the Historical Jesus, we can see that this pagan idea of pistis (blind belief) directly contradicts his teachings on ‘knowledge being revealed’. It is at this point that the voice of the Historical Jesus is finally lost and Christianity adopts the Greek mystery religion’s emphasis on power being transferred through ritual and secret knowledge and belief, rather than self transformation and wisdom gained through experience.

This idea is further emphasised in 1:11 ‘He came into his own, and his own (Jews) received him not. But as many received him, to them gave he power to become the sons of God even to them that believe on his name’.

For the writers of this Gospel, ‘power’ is given in return for belief. The Hebrew term for ‘Children of God’ (לדים של אלוהים ) is misunderstood to imply a mystical power rather than a relationship.

Working our way to 1:23 – the Johannine Evangelists are doing everything they can to discredit John the Baptist, to the point where they have the Pharisees ask him, ‘Why then do you baptise if you are not the Christ, nor Elijah, nor a prophet’? Just putting aside for the moment that, at this point in the story, this speech would make no sense as nobody knew what a ‘Christ’ was until much later. It totally misunderstands the Jewish concept of Mikvah and ritual purity and transforms baptism from a Jewish Mitzvah into an initiation into a Greek Mystery Cult.

Baptism for John and Jesus, as we know from Epiphanius of Salamis, was a daily ongoing practice not a Greek one-off ritual of entrance and acceptance. By the time we get to 1:29 ‘The lamb of God which taketh away all sin‘ we can comfortably conclude that the writers of this Gospel had never even met a Jew and were not talking to Jews.

The Passover Lamb is killed as an act of faith and was never a sacrifice to take away sin. Forget the fact that everything the Historical Jesus said and did was in opposition to the Judean cult of animal sacrifice, we can see by this point that the Gospel of John is nothing but a Greek fantasy loosely based on the life of a Jewish mystic.

It seems sad to me that so many people have been so eager to put their own words into the mouth of Jesus. It seems unforgivably rude and big headed, if not downright blasphemous.

Having said all that, I don’t see any problem with ‘inspired’ writings. I just wish people would stop trying to put words into the mouth of Jesus.

The Gospel of the Holy Twelve From this analysis of the first chapter of the Gospel of John, we can see that there is really not much difference between this fictitious Gospel attributed to ‘John’ and Reverend Gideon Jasper Richard Ouseley’s admittedly fictitious Gospel, ‘The Gospel of the Holy Twelve’.

Rev Ouseley stated, without blinking, that his Gospel was ‘translated from an ancient Aramaic text, which had been deposited in a Buddhist monastery in Tibet by an Essene priest’. The fact that any Essene priest would have missed the Buddhists by five hundred years did not seem to bother anyone. When he was finally challenged on this silly claim, after the Gospel’s initial publication in 1904, he cheerfully admitted he had ‘received the text in a dream’. The reason I mention the Reverend Ouseley is because he, like many people today, seem to believe that having secret knowledge or belief will, of itself, bring them what they seek and obviously have no qualms in using Jesus to champion their personal beliefs; searching, as they do, for vindication through the approbation of others.

I wonder if we will ever get to the point where just the words of the Historical Jesus will be enough for us, as they were for the original followers of the Rabbi?

Surely, any belief we choose to adopt can only ever be an extension of our own self. Our beliefs, particularly the ones we get angry about, are only the idols we have made for ourselves.

The words of the Historical Jesus demand a daily battle with ourselves and he invites us, no challenges us, to enter by the narrow gate. Surely that should be enough for anyone?

Research Paper: The Jesus of History: Did He Really Exist – The Jesus Family Tomb