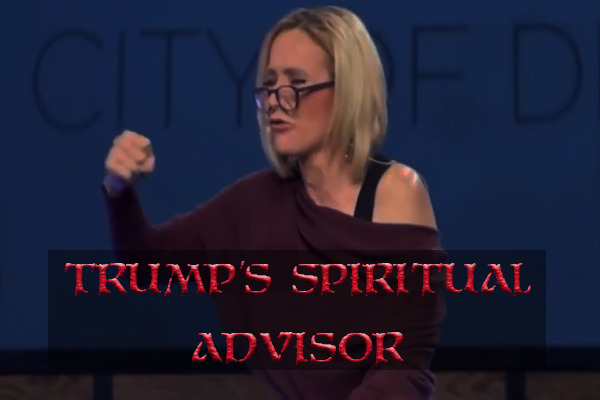 It would be easy to laugh at President Trump’s Spiritual Advisor, Paula White, but it would be a mistake to dismiss her as insane. The truth is that Paula White represents two thousand years of Christian scriptural tradition. It is that tradition that unites Christians in their belief that the closer to God you are the more insane your behaviour becomes. This is where we get the word ‘touched‘ as a euphemism for someone who is obviously insane. It comes from the phrase ‘touched by God‘. 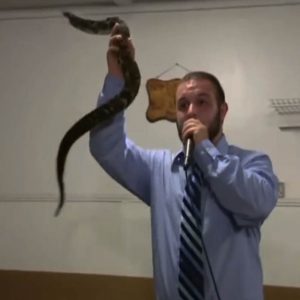 Unlike Hebrews, the Greco-Romans responsible for the creation of the New Testament lived within a time and a culture that believed that human life was ruled over by many Gods and each of those Gods had his or her own temple and a dedicated Oracle.

The Oracles were individuals who were directly touched by the hand of their God and people would travel thousands of miles to consult the Oracle of their favourite Deity.

In the Greco-Roman tradition, Gods were external to the human experience and therefore any evidence of God must be, by its very nature, supernatural. The proximity of God – to be touched by God – as is implicit in the act of prophecy, was always accompanied by symptoms of psychotic dislocation.

The Oracle of Delphi was one of the most sacred Oracles in all of ancient Greece from about 1400 BCE to 400 CE. Her often manic ravings were highly regarded and her advice affected everything from the outcome of wars to when farmers planted their crops.

The Oracle entered her trance by inhaling sweet-smelling noxious fumes coming from deep fissures underneath the temple, according to the ancient historian Plutarch.

The role of hallucinogenics, of one form or another, in ancient Greek prophecy is well documented.

The fact is that the people of the Greco-Roman world expected their prophets to be stoned out of their minds.

In the Synoptic Gospels the concept of the proximity of God is an unholy mix of Greco-Roman misunderstanding of Hebrew spirituality seen through the distorted lens of the writer’s Greek expectations.

The term ‘Spirit‘ in the Gospel of Mark was mainly a reference to a concept very similar to the Middle-Eastern idea of the Jinn: a spirit creature who could possess humans.

“There was a man in the synagogue with an unclean spirit and he cries out, ‘Ha! What is it to us and you Jesus the Nazarean‘!…”   Mark 1:23

Mark also mentions that Christ was to be ‘Baptised in the Holy Spirit’ as a kind of magical transfer of God’s power so we can see the concept evolving.

In the Gospel of Luke, we see the word ‘Spirit’ used as a metaphor for ‘God’ and is used in the same way that Saint Paul uses the term ‘Pneuma‘ as something extraneous to the person that has been added like a magical power.

With almost the same words, the poet Virgil, in Book VI of the Aeneid describes the Oracle as prophesying in a frenzied state as the power of her god possesses her.

By the time we get to Acts of the Apostles nearly every other verse talks of the Holy Spirit.

“And they were all filled with the Holy Spirit, and began to speak with other tongues, as the Spirit gave them utterance.” Acts 2:4

“And it shall come to pass in the last days, says God, I will pour out of my Spirit upon all flesh, and your sons and your daughters shall prophesy, and your young men shall see visions, and your old men shall dream dreams;” Acts 2:17

In the New Testament, we can see the imposition of a uniquely Greek interpretation of the proximity of God. It’s inevitable then that, for Christians of today, manic behaviour is taken as evidence of the power of their God.

Hebrew culture, on the other hand, rejects the Christian vision of the proximity of God.

In Genesis, God breathes into a human made of clay and gives him the breath of life.

“God formed the human out of soil from the ground and blew into his nostrils the breath of life; and the human became a living soul.” Genesis 2:7

For the Hebrew people, God is seen as the soul of all souls and is not extraneous to the person.

According to the Jesus of History the proximity of God can be experienced directly by everyone.

The ‘you’ the Jesus of History was referring to was a Pharisee, so he really is saying that God is within all of us – not just Christian believers (as Evangelical Christians would have you believe). When the Jesus of history spoke about the proximity of God he used the word ‘Light’ as a metaphor:

“Let your light so shine before men, that they may see your good works, and glorify your Father which is in heaven.”  Matthew 5:16

“But if thine eye be wicked, then all thy body shall be dark. Wherefore if the light that is in thee, be darkness, how great is that darkness?” Matthew 6:23

Matthew 6:23 is a misquote of the Gospel of Thomas 24, which was a first century collection of the sayings.

“There is a light within, the children of light, and that light shines on the whole world. If we don’t become that light there is darkness and we are that darkness.” Gospel of Thomas 24

So why does it matter what the ancient Greeks thought about God and what has that got to do with the Jesus of History. I’ll tell you!

Beliefs have consequences and Christian beliefs have shaped history for two thousand years. It was Evangelical Protestant Christians who created the Ku Klux Clan and forced prohibition on the American people.  Christianity made America in its own image.

Paula White like most Christians is stuck in her head. Christianity gives its adherents no way out. The God they hear is just the sound of their own thoughts. The God they see is just a reflection of their own idea of themselves and has nothing to do with the Jesus of History.

As an example just try this experiment. Find a place where you can be quiet and undisturbed and just take a few breaths. Close your eyes and listen to what’s going on in your head. As the novelty wears off, you will begin to notice your thoughts arising and those thoughts are arising from your feelings and all of those feelings are reactions.

Paula is stuck inside her idea of herself. The sum of her past, how she feels about her past and her expectations for the future forms a distorted window through which she sees her world. This is why her God likes all the things she likes and hates all the things she hates. Paula has her very own personal Jesus.

That’s why Christians find it so hard to understand the nature of evil. That’s how Paula could enthusiastically pray for a child to die in its mother’s womb and that’s why Christians send her millions of dollars to do so. Like most Christians, the God that Paula prays to is the Christ of Myth.

The Jesus of History, on the other hand, taught that God must first be found within, within the silence beneath your idea of yourself. From this silence comes clarity and light. That clarity and light is available to everyone – It’s even available to Paula if she could just stop thinking long enough to listen.